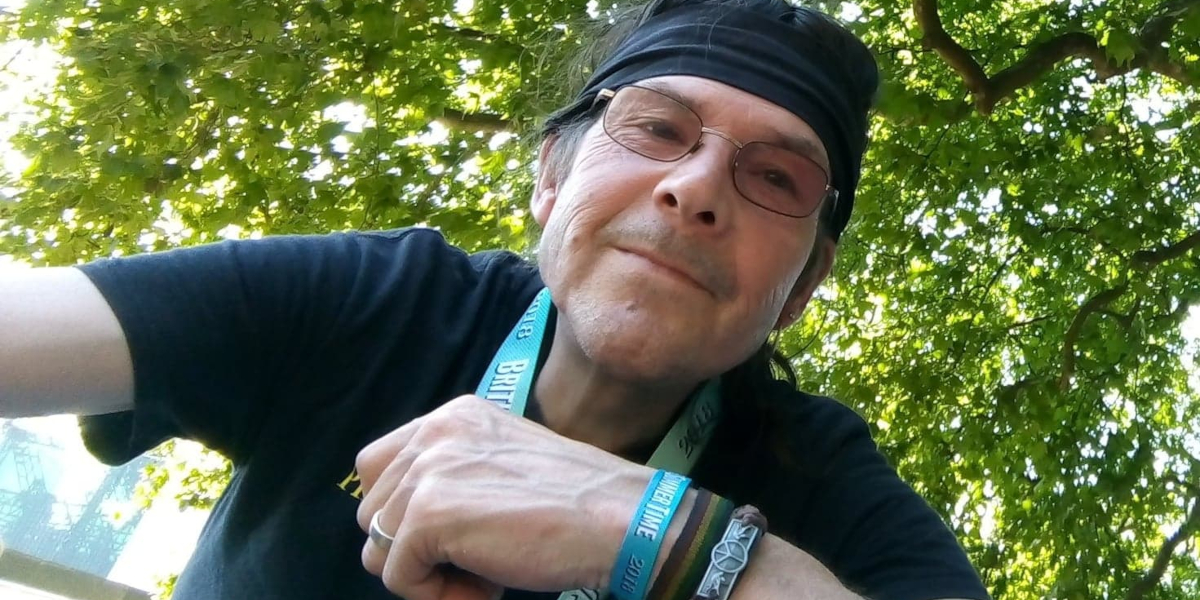 Roger Dyble, (well known locally as Dibs) has been volunteering at the Gorleston Clifftop Festival for so long that nobody is exactly sure when he first got involved. Dibs has, however, been a familiar sight behind the scenes over many years and was well known for being an enthusiastic and committed festival volunteer.

As always, Dibs was very evident throughout the 2022 festival weekend.  Following what was one of the best attended events in the festival’s history, Dibs was admitted to hospital with a suspected hernia/appendix and succumbed to a perforated bowel due to undiagnosed Cancer on 14 August 2022, aged just 57.  Dibs is survived by his wife Dawn, sister Julie, and niece Sarah.

Dibs met Dawn at MIND in 2011 and Dawn was quickly drawn into the Gorleston Clifftop Festival family from the start, with both of them continuing to volunteer each year following their marriage in 2014.  Dawn tells us that Roger loved to watch the Punch & Judy whenever it was on and he enjoyed listening to the varied bands that played the festival each year; especially The Divide and More Madness (Madness tribute band).

“Dibs was a very caring, down to earth gent who loved volunteering at the Clifftop Festival and other music festivals.  He also loved cooking, Dragons & Dungeons and creating useful things with recycled pallets.  Dibs was a massive James Bond fan and loved The Bloodshake Chorus, The Prisoner, Doctor Who (the original series) and old horror movies with Vincent Price and Christopher Lee. When we saw Roger Waters (Pink Floyd) live in Hyde Park he just had to have his photo taken with Paddington Bear at Paddington Station! He also loved his job as a Rehabilitation Woodwork Supervisor at Norfolk and Waveney Headway in Gorleston.“

“I worked alongside Dibs at the festival for several years.  Dibs was very much in his element when volunteering with us!  Both he and Dawn always sang and danced to the bands, ensured that backstage ran smoothly and helped in any way they could.  He was a hugely valuable part of the team.  It was great to have worked with him for as long as I did.  Dibs will be greatly missed.”

Our thoughts and prayers are with Dawn and the whole family at this terrible time.  Dawn and the family would very much appreciate any help with funeral costs and have a Crowd Funder page.  If you can support them in their time of need please do.

This year's event is kindly sponsored by: